Leeds By Example aimed to trial a new approach to recycling on-the-go, by working collaboratively with a range of national and local partners and introducing bright new infrastructure and bold, playful communications. The year-long campaign, supported by Bunzl, launched in October 2018 and has been robustly and independently measured. Now, the results are in!

Leeds By Example installed 186 eye-catching new recycling points in Leeds city centre. As well as on-street bins, these include recycle reward machines, and other recycling points in retailers and workplaces. Results from the trial show the proportion of people disposing of plastic, cans and coffee cups in a recycling bin in Leeds City Centre almost tripled from 17% to 49%. 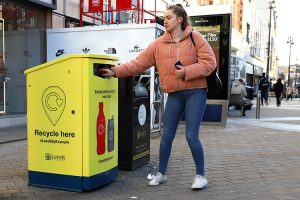 During the six-month period, 1.2 million coffee cups, 140,000 cans and 160,000 bottles were recycled and the quality has been better than other on-the-go recycling schemes. Polling showed that awareness of recycling in Leeds City Centre doubled and of those who had seen something, 85% recognised the campaign.

Leeds By Example continues to thrive, as Leeds City Council have taken over waste collections and are continuing to work with local partners Zero Waste Leeds and an independent monitoring partner. They are keen to increase the number of recycling to promote points over time and to build on what’s been learnt to date.

Leeds By Example has come to symbolise city pride and is increasingly recognisable as a local brand for environmental sustainability, which will be exemplified by the Leeds By Example website, focusing on the climate emergency (www.leedsbyexample.co.uk). The same model launched in Swansea and Edinburgh this autumn, building on what has been learnt in Leeds and the results from all three cities will be combined next year to create a how to guide for other towns and cities to follow suit.