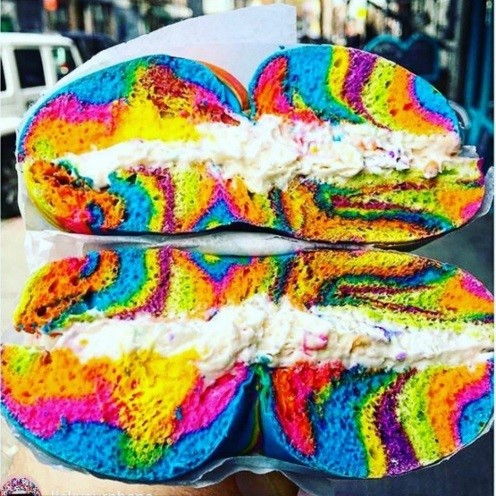 One of the hottest trends in the food world right now is rainbow versions of everyday foods. Formerly ‘normal’ dishes are being transformed into multi-coloured wonders, with the addition of food colourings. Foods that are being given the rainbow make-over include all-day staples such as croissants, bagels, cheese toasties, pizzas, muffins and waffles.

It all began when foodies noticed a plethora of kitsch, gastronomically confusing desserts being Instagramed from Japanese eateries.  In the UK, the cult Beigel Shop on Brick Lane embarked on a journey into spiralling coloured bagels, inspired by the original New York venture. At the start of 2016, Beigel Shop was selling around 1500 a day.

Studies show that colour not only plays an important role in how we taste, but can itself suggest flavours to our brains that aren’t necessarily there. Colour variety might also keep us from getting bored of eating the same food as the more frequently we are exposed to a food, the less appealing we will find it. If this was the case then it might explain why some of the most pedestrian foods are getting the rainbow treatment.

In response to consumers who find the idea of food loaded with artificial food colourings unappealing, operators are offering healthy rainbow food equivalents. There’s plenty of naturally colourful ingredients that can be used to a similar affect; like tomatoes, yellow pepper, broccoli and red onion used to create a rainbow pizza topping for example.

Operators like Grill My Cheese, in Farringdon, have healthier creations on offer like colourful toasted sandwiches filled with beetroot, rocket, roasted onions, goat’s cheese and truffle oil, with the help of lavender, basil and tomato.

A search for #rainbowfood currently brings up more than 36,000 results on Instagram*. But certainly, a commotion on the internet does not fully represent the feelings of the food world.  Some foodies find are concerned that this trend reflects a modern culture of creating food for Instagram likes, where marketing is more important than taste (in all senses of the word).

However, despite its critics the trend continues, and the latest colourful creation to capture imaginations is the rainbow coffee. Baristas across the UK are cleverly adding food colouring to steamed milk to create beautiful rainbow patterns on the frothy tops of café lattes and other hot beverages.

And following hot-on-the-heels of this rainbow revolution is a new phenomenon for ‘galaxy desserts’. A plethora of sweet treats that mimic a gorgeous, starry-night sky — and it’ll make you feel like you’re holding the entire universe in your hands.