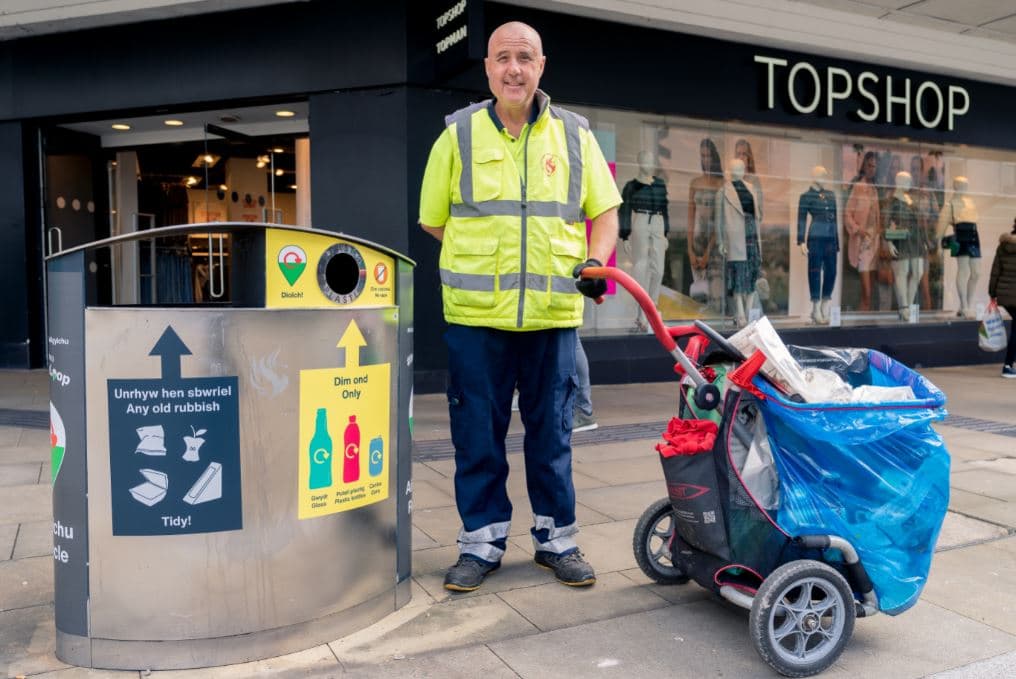 Swansea #InTheLoop, is a five-month pilot scheme with the aim of increasing levels of recycling of plastic packaging, cans, glass bottles and coffee cups across the city.

Led by Hubbub and Swansea City Council, Swansea #InTheLoop will see new look bins across the city centre and new recycling points in local offices, shopping centres, universities, hospitals and transport hubs. An art installation of a giant wave made of recycled plastics, cans and cups has been created by South Wales eco-artist Wren Miller, to further raise awareness of the importance of recycling. The Wave can be seen in the following locations around Swansea:

Other locations are invited to get in touch if they’re interested in hosting The Wave after 6th October.

The campaign is being supported by local partners, who collaboratively have made the initiative possible. As well as Swansea City Council, these include the Environment Centre, Swansea University and Keep Wales Tidy – pioneers of the Love Wales recycling initiative.

A central focus of the campaign will be to improve coffee cup recycling. Cups can be recycled but have to be collected separately from ordinary card and paper, due to the plastic lining that stops the cups from leaking. To tackle this, Swansea City Council will introduce new bright orange bins in the city centre to collect coffee cups.

Gavin Ellis, Co-founder and Director of Hubbub said: “We’re really excited to see our second on-the-go recycling initiative introduced in Swansea. The impact our pilot campaign had on the city of Leeds far surpassed our expectations and with Wales already having an impressive track record on recycling, we are looking forward to seeing if the people of Swansea can take things a step further. Through our eye-catching bins, to the businesses taking part in raising awareness among their employees and customers, we will give residents and visitors to Swansea a better opportunity to recycle while out and about.”

Philip McDonnell, Manager of the Environment Centre, Swansea said: “We see through our public engagement activities and environmental projects how keen people in Swansea are to do the right thing, so it’s great that Swansea #InTheLoop gives everyone the opportunity to recycle more when they’re out and about. We hope that residents and visitors alike will get involved, as the combined small actions of each individual can add up to create a big change.”

Hubbub launched its inaugural on-the-go recycling scheme #LeedsByExample in 2018, which saw on-the-go recycling rates in Leeds increase from 17% to 32% in just six months. The campaign has sparked national interest from cities across the UK, with Swansea being the second city to join the movement, soon to be followed by Edinburgh later this year.