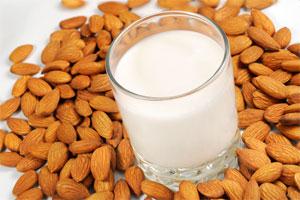 Almond milk: a dairy free alternative with many benefits

The term ‘dairy free’ is generally used to describe a diet that avoids cow’s milk and products that are made from it, including cheeses, yoghurts, cream, crème fraiche and buttermilk. Some people avoid cow’s milk and go dairy free because they are vegan, have other dietary preferences, or may have dietary intolerances and allergies. The problem for those trying to avoid foods containing dairy products is that they include the most commonly used ingredients in food manufacture.

There are a number of dairy free alternatives on the market including soya milk, coconut milk and almond milk. Once dominant, soya milk sales have seen a steady decline since the launch of almond milk into the UK in 2012. Sales of almond milk have increased to over £44m with many customers recently reporting higher demand for almond milk than traditional soya.

Almond milk makes a great base for smoothies, delicately blends with tea or coffee and is also a great substitute for milk when baking.

Almond milk is especially popular because it allows other flavours to come through easily whilst not loading consumers up on calories. Benefits include half the saturated fat of regular skimmed milk, a source of calcium, antioxidants, copper, magnesium and vitamin E. A delicious taste also makes it easier to integrate into everyday life.

Our exclusive brand Label 2 Go has recently released a range of Free From labels for foodservice operators to use on their packaging when it does not include any wheat, dairy or meat. The dairy free label is colour coded in blue to help customers easily identify food products that do not contain dairy.
Ben and Jerry’s have recently announced that they are using almond milk in the preparation of their famous desserts, leading further credence to the versatility of the product. The substitute also neatly allows consumers to enjoy their favourite puddings in vegan and vegetarian options.

For popular coffee products like cappuccinos, lattes and flat whites, Baristas often find it difficult to create the same foam texture when they use substitutes instead of cow’s milk due to the difference in fat content. New to the market, Blue Diamond have launched a Barista variety. With increased almond content, this almond milk has been produced specifically for Baristas to deliver a smooth crème in their most popular freshly ground coffees.