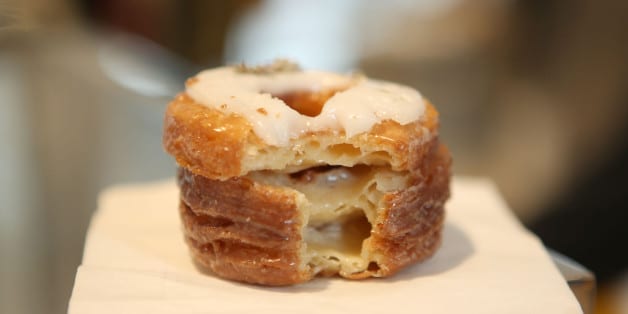 Hybrid foods are shaking up the food scene

Playful, photogenic and infinitely adaptable, hybrid food is continually popping up on Facebook and Instagram, as millennials create and bake their creative mash-ups and promote them online.

So, what is hybrid food? Simply put, it’s two foods grafted-together to make a new one. For example a croissant and a doughnut – to make a Cronut, or a pizza and a waffle – to make a Piffle.

Hybrid foods have become so popular that according to trade magazine Restaurant Business they are now the fastest growing food trend in the last ten years.

But where did hybrid foods begin? According to Natasha Geiling at smithsonian.com, hybrid food has been around since the beginning of trade. As cultures began to overlap, it was only natural that new dishes were created, when people shared and combined cooking styles and ingredients to create new dishes and flavour profiles. An example of an early food hybrid is Italian spaghetti, which would have never existed without Italy’s exposure to the Chinese noodle.

One of the first, and perhaps the most well-known hybrid food is the Cronut – a croissant and doughnut in-one. Created in New York in 2013 by a French pastry chef called Dominique Ansel – the bakery sold out of its inaugural batch within the first 20 minutes.

To the excitement of Cronut fans, Dominique Ansel opened a UK branch of his bakery in 2015. Customers still queue 2-hours before the bakery opens just to ensure they get a taste of his world-famous creation.

Since 2013, the success of the Cronut has spurred foodies, caterers and restaurateurs to invent their own hybrid foods, proving an excellent way to attract new, young customers and to promote their unique offerings online.

In the UK, London based bakery Beas of Bloomsbury invented and launched the Townie, a pastry tart shell with a gooey brownie centre. These were so popular that the bakery sold 800 Townies in ten days.

Japanese casual dining restaurant Wawa put a Katsu Ramen burger on their menu – a burger infused with katsu spices held in a ramen noodle ‘bun’. The combination of three foods – some have argued this is more of a tribrid than a hybrid!

The latest culinary hybrid to hit Instagram is the Iceclair. Created by Melba, the Savoy’s gourmet counter on the Strand, the Iceclair is an éclair filled with soft serve ice cream then dipped in chocolate. A truly scrumptious meeting of éclair and ice-cream!

Interestingly, as hybrid foods have evolved and diversified – so has a range of hybrid packaging. Similar to hybrid food, hybrid packaging utilizes different material types in one packaging solution, to provide a ‘best of both worlds’ type solution for contemporary food-to-go.

For example, Combione packaging from our partner supplier Colpac, combines a paperboard base with a plastic lid to create an easy one piece solution that is both leak-proof, and offers excellent visibility. Combione is available in sizes large (1110ml) and extra-large (1280ml).

Coalesce from partner supplier Anson packaging is a unique patented hybrid solution, with a paperboard base and plastic lid, and is available in sizes, small (500ml), medium (750ml) and large (1000ml).

In 1874, a US patent was awarded to Samuel W Francis for a utensil with a handle and a spoon-like end outfitted with a knife-edge and fork tines. Often called a spork, or a spoon/fork – this convenient, multifunctional piece of cutlery is particularly useful for food eaten on the go. In fact, at Bunzl Catering Supplies we sell rPET twisty salad bowls with a spoon/fork inserted into the inside, top of the lid – which means that the cutlery is ready to travel, hassle free.

New to the market, and perhaps a reflection of the multi-cultural food available to eat on the go, is the Chork – a hybrid of a chopstick and a fork. The chopsticks can be used as they are, or snapped off to be more like traditional chopsticks. Turned the other way round, customers who prefer a more traditional tool for eating, have the familiarity of a fork.


Warning: Invalid argument supplied for foreach() in /home/customer/www/bunzlcatering.co.uk/public_html/wp-content/themes/untitled-theme/single.php on line 77