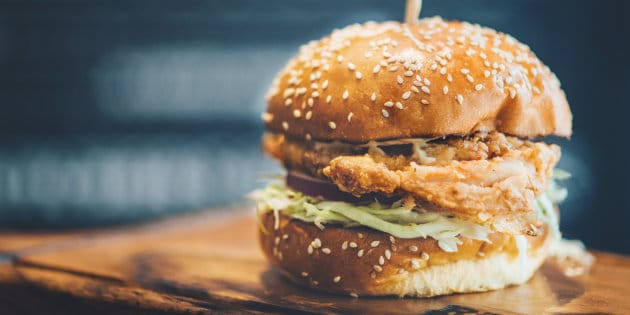 Fried chicken sandwiches have become a must-have dish for foodservice operators, bringing consumer’s love of burgers and fried chicken together in a single delicious package. Restaurant chains that aren’t even known for chicken are looking at adding it to their menus to appeal to more consumers and boost sales. In 2016, of the 100 biggest restaurant chains in the US, three of the five fastest-growing were chicken concepts.

In a new series of blogs for 2017 we’re bringing food operators the latest trends for the on-the-go food market. From Acai bowls and Poke, to Bao burgers and rolled ice-cream – we’ll be taking a close look at the must-have dishes essential for any 2017 take-out menu; and we’ll be exploring why these dishes have risen to popularity so quickly.

According to Restaurant Business Online (January 2017), fried chicken is the fifth leading chicken dish on menus, per Tecnomic’s ‘MenuMonitor’ – two in five consumers say that fried is their chicken style of choice.

Fast food chain KFC’s legendary delicacy, the Double Down chicken burger, has just launched in the UK for a limited six-week period. It consists of strips of bacon, lathered in melted cheese and barbecue sauce which are sandwiched between two succulent pieces of fried chicken (which act as the bun).

“There’s been so much excitement for the Double Down since it first launched to the US in 2010,” said Jack Hinchliffe, Innovation Director at KFC UK & Ireland. “It’s sold out in every country that it’s been released in, so we’re anticipating it’ll be a sell-out success here in the UK.”

In October this year, American burger chain, Shake Shack, opened their eighth UK site and seventh in London. In August 2017, they diversified their chicken sandwich offering with a new hot chicken sandwich (available nationwide). According to a press release, the item hinges on a southern motif, offering a “crispy chicken breast dusted with a guajillo and cayenne pepper blend and topped with slaw and pickles.”

It could be that the success of fried chicken is partly due to simple economic reasons. In 2016, chicken prices were significantly lower than beef prices, giving chicken chains a leg up on the burger-centric competition. While prices have equalized, the success of new chicken items proved to chains that there is a demand for poultry.

In the 1990s and early 2000s, fried chicken was widely seen as unhealthy. KFC was the largest chicken chain by sales in the US at the time — but it wasn’t doing much to boost fried chicken’s reputation.

However, in 2016, fried chicken transformed into something that customers saw as quality food – and maybe even somewhat healthy. Chicken is a lean meat that’s naturally low in fat, which if cooked without additional fat, can make it a healthy option. Chicken has managed to rehab its reputation – a key factor in making it a desirable dish to have on menus.

Healthy or not, fried chicken is the world’s favourite food according to Rebecca Lang, Southern cooking expert and author of ‘Fried Chicken: Recipes for the Crispy, Crunchy, Comfort-Food Classic.’ On Draft Magazine online, Lang introduces fried chicken in some of its popular styles:

No matter what style or flavour the fried chicken is, or which sauce and pickles are added to the sandwich bun, the important thing is that the chicken is served piping hot and retaining its crispy outer coating, and that the sandwich remains fresh and nicely assembled.

For fried chicken sandwiches that are served on-the-go, this can present foodservice operators with a bit of a challenge. One solution is the innovative Hot ‘n’ Crispy bag – a patented range of insulated, disposable bags launched in 2004 by our partner Supplier Smith Anderson. Hot ‘n’ Crispy bags are specially designed to keep food hot and crispy, a favourite for heated display cabinets (up to 220°C), and increasingly used for keeping food preserved during restaurant home delivery.

Alternatively, if looking for a ‘boxed’ solution, the Sustain bagasse hinged containers provide a practical, sustainable answer. Part of an exclusive brand range of renewable and compostable food packaging, made from sugar cane, Sustain bagasse hinged containers are sturdy but light, and prevent the fried chicken sandwich from being crushed on the move.